I spent a long time debating whether or not to sign up for The Mookie last night. Why? The new episode of South Park that was on last night was about World of Warcraft. See, my wife and I have an addiction to a very similar game, and I absolutely had to watch it with her. So when I signed up, I knew I needed to be done in two hours -hell making it two hours in a blogger tourney is a pretty impressive feat.

I actually did pretty well, and was still around as it was nearing the second hour. I was about the middle of the pack with 15 or so remaining when the episode of South Park started, so I was between the bedroom and the pc trying to watch it and play my hands. Eventually I just called a couple of pushes (one with A-7 one with K-5) and busted out in 12th. With the people still remaining in the tournament it was going to take some ideal play, mixed with lucky cards to make it to the money anyway. I am really happy with my play overall, and next week maybe I can set aside more than two hours, just in case I happen to get deep again.

Anyway, I got into a hand fairly early on that led Alcanthang to call me a donkey, so I just wanted to throw it up here and see if I can get an opinion or two on how donkey-ish my play was.

I am in early position with K-Jo. I am going to try to limp into the pot with K-Jo most of the time anyway, maybe I raise if I am on the button and no one is in it, but in this situation limping from EP is my choice. It folds to Al, who is on the button, and he limps as well. Since he limped from the button, I am not putting him on much of a hand here, possibly king or queen high or a suited two gapper. Flop comes up Q-10-6 rainbow, giving me the OESD. I want to take another card for sure, barring an insanely large bet, so I check it. If I was on the button here, and it was checked around to me, I would bet it. In this case I checked because I wanted to see the next card as cheaply as possible. With the range of hands I was putting Al on, I figured he could have paired any card on the board so I was fairly sure he was going to bet. Had I bet, he would likely have raised, and with a drawing hand I am not sure if I call a raise. Al makes a pot-sized bet (210 at the time) which I call. I figure his best hand right now is a Q-x, meaning that any Ace, nine, or king puts me ahead. I call the bet with what I believe to be 11 outs (15 if he had limped with a low PP that didn’t connect). If I don’t hit, I am going to have to lay them down on the turn. The turn card is an ace, giving me the straight. But I figure he has me on a drawing hand so if I bet into it he may fold. I check to him and he bets 600 (pot being 630). I reraise him my last 490, he calls and flips over QJo. I take down the hand. Then he calls me donkey.

He goes on to say that my call was foolish because he was 2-1 on the flop. Now even if I knew what he was holding, which I obviously didn’t, though I did figure he had paired either the Queen or the 10, I don’t think he was nearly that far ahead. Even if I did know what he was holding, with 11 outs and 2 cards to come, I think I make that call on the flop. If I had missed it on the turn and he bet 600, I would have probably layed it down, but on the flop with a two way straight draw and a lot of outs, I don’t see how you can lay that hand down. Cardplayer.com shows the odds on the flop to look like this: 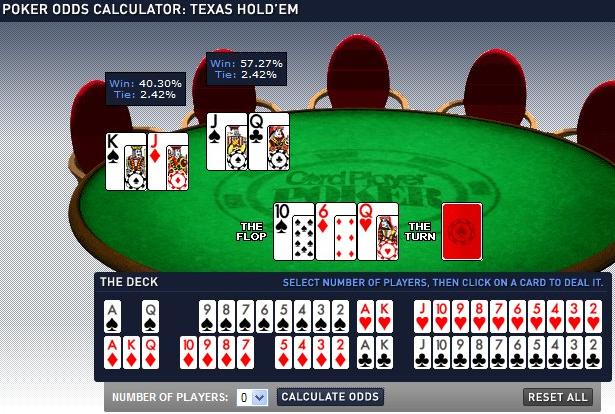 So, was my call of the pot-sized (210) bet on the flop a donkey call? Honestly I would like to know if it was. I don’t think I will quit making that call even if it was, but I am curious to know if it was really such a bad call. And for those of you who get all hot and squishy when you see hand histories, here is that as well: