I am getting so damn sick of people punishing dogs for the ignorance of their owners. It’s not like we punish children just because they go around killing other people as a result of poor supervision, well, actually, that might be a really bad parallel to draw. When children go bad and start killing people they get punished, and the parents are looked down on by society (as they should be), while when a dog kills someone, the dog is put to death (without question), and the owner is looked down on by society.

The thing is that in both cases it is the lack of proper supervision that leads to the end. Had anyone spent any time with junior (as he was accumulating a cache of weapons in his bedroom) that tragedy might have been avoided. Of course the “might” on this one is up in the air. Similarly, the dog would NEVER have killed a damn thing if it had been raised in a loving home.

You can talk all damn day about how vicious dogs are, I am gonna turn a deaf ear to it. Dogs, like children, are a product of the environment they grow up in. When taken care of and disciplined they will behave just as you want/hope/expect them to. Leave a dog, or a child, to fend for itself for the majority of a couple of months and you are going to end up with quite a different animal.

I think that the owner (in the case of the dog) and the parent (in the case of the child) are far more responsible for the actions than the child or dog. What we really need to do is put some stringent guidelines down regarding the responsibility of parents/pet owners. Failure to control your child/dog, and any subsequent deaths resulting from that failure, will mean your ass is the one in jail. You are the one in charge, after all. You have to beat them into submission while they are young (or use positive reinforcement, yeah, like that works…) to make sure that they fear you more than they fear god. That is how you make a good dog/child.

That all aside, the reason I am up in arms is a Story from Brazil.

It is short so I will just quote the whole thing:

RIO DE JANEIRO, Brazil (Reuters) – Pit bulls were banned from Rio de Janeiro’s famous beaches and other public places in the Brazilian city on Wednesday under new regulations that could eventually make the sometimes aggressive breed extinct in the area.

Many residents own the fearless, sturdy dogs for protection in a city where murder rates are among the highest in the world.

The ban, issued by the state of Rio de Janeiro after more than six years of debate, follows numerous cases of maulings by pit bulls, especially of children. Last year, a pit bull badly injured a 4-year-old girl in the city, while a year earlier another pit bull mauled a 72-year-old woman to death.

Gov. Rosinha Matheus announced a ban on breeding, importing and selling pit bulls and made the registration and sterilization of existing dogs compulsory within the next four months.

In addition, pit bulls, rottweilers, dobermans and fila brasileiro dogs — purebred as well as mongrel — can only appear in the streets between 10:00 p.m. and 5:00 a.m, and away from public parks and squares.

They can only be walked by a person older than 18 and always on a leash, with a muzzle when in the street. Owners who do not comply can face charges while their dogs will be taken away by police.

According to the Brazilian Pit Bull Club, there are some 30,000 pit bulls in the state. 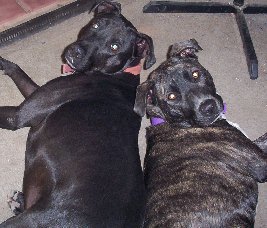 So, that all being said, can you seriously look at the faces of my spoiled little dogs and think that they could kill anything? Come on, they are little cuties. Sure the little green eyes make them look a bit more vicious, but so vicious that they would waste the energy to get up off of the floor? Probably not. Hell they barely even wasted the time to look up at the camera for this shot, and that is the most they will ever do, outside of licking you or barking at people that they can’t get at. Once the people can be reached they immediately either run away or begin to lick like their is no tomorrow. Guard dogs they are not.

Still my life is better for having them, so keep you damn dog on a leash if you can’t control, same with your child, and quit spoiling it for the rest of us.