Following on the dog theme over the last couple of posts, I was happily snapping away with my little digital camera. While it is a refurbished, bottom of the barrel Kokak CX4200, I am pretty happy with the results. I do suppose that your average ‘professional photographer’ would have all kinds of issues with the thing, but then, your average ‘professional photographer’ wouldn’t have been doing bottom-of-the-barrel shopping in the first place…would he? I am sure that this is not the camera for you if you plan to make museum quality prints, but when your venue is the internet and you just want it to look pretty good (as opposed to looking jaw-droppingly beautiful), 59 bucks for a used one of these will kick the shit out of a thousand for whatever the next ‘change the world’ digital recorder happens to be. Mark my words, “I will never pay more than 100 dollars for a camera” (might need to include a clause relating to inflation in that statement), last year’s model works wonderfully, thank you. Yes, additional optical zoom would be great, since just seeing the flower didn’t give me the ‘true essence’ of its beauty, while looking at it through a microscope would, and etc.

But, it is my intention to talk, once again, about our little puppies. So I shall. 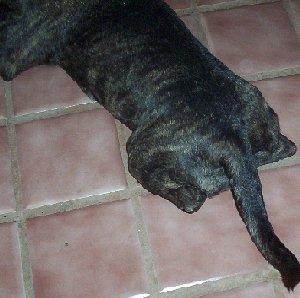 Previously, I posted a little picture of the puppy Zelda doing her best to look like the sphinx. While that didn’t generate any feedback (hell, nothing I write ever does), I wanted to do a bit more to illustrate the condition that she has. That is where the camera comes in.

Usually, it is pretty hard to get a photo of Zelda doing anything. She moves pretty quickly. As in the photo that you see to your right. She moved a bit too quickly for the camera to catch the weird angles that her hind legs were in only a fraction of a second ago. Still it is an unusual pose; How can any dog manage to work its Stifle joint in that way? Let alone the hock? It is just the way that Zelda lays. 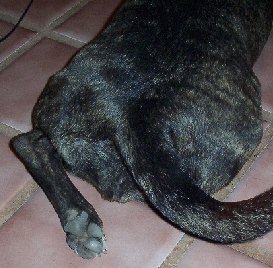 This second photo is of Zelda’s rear end, when I caught her by surprise. In this photo (which can be viewed at a much larger scale if you click on it, as well as the previous photo), you can see just how far away from the norm her laying position is. I know that it looks ‘Photo shopped’, but I swear that it is not. This is how Zelda lays much of the time. I even just loaded the much larger version, and it still looks like a fake to me, but I took the picture, and it isn’t fake. Perhaps, in the future, I will be able to get a shot of Zelda when she is ‘not quite’ looking freakish, but for now all I have is normal or freakish. It is not my fault that I wasn’t able to get her in better light before I started to snap away. It is not her fault that she always jumps up and licks me when I am in the room, yet, it is unfortunate that I wasn’t able to get a good shot of that leg that didn’t look like I faked it.

Now I must thank the little puppy Zelda for giving me a few days of bitching fodder, as well as some nice photos. Zelda is a very happy, affectionate little pup, but when the time comes to decide between hip surgery or death, unfortunately, I fear, Zelda might receive the latter.

Now that I have stated publicly that money is more important than a pet, I leave you with only this thought. Do you actually ever cry when you lose money? What about a pet?