Cliff Burton was really the first bass player that I knew by name. While most other bass players seemed to fade into the background and only seemed to be noticed when they made a mistake, Cliff was able to not only keep the beat and carry a tune, but many of his bass lines were actually at the forefront of Metallica’s songs. The song Orion springs immediately to mind (alas I can’t find a version of Cliff playing it). Then there are some of his solos that mimic the guitar so well that you can hardly believe he can get the sound out of a bass. While Metallica was becoming an underground phenomenon in the early to mid 80s, Cliff was leading the charge with solos and writing credits on nearly every memorable Metallica song.

It was twenty years ago today that Cliff Burton died in a bus accident in Sweden. This happened only months after Metallica had released the Master of Puppets album, which set a bar for the genre that I think has yet to be matched. Cliff wasn’t around to see Metallica’s meteoric rise to fame, but much of his music made the trek along with them. When the …And Justice For All album was released a couple of years later, the band paid tribute to him with the song To live is to Die.

With the release of …And Justice For All, Metallica finally got into the video generation with their video for the song One, which received a grammy nomination the following year. The video brought mainstream airplay on both MTV and national radio stations, which would lead to Metallica producing more radio-friendly songs on all their forthcoming albums. For that reason alone, many fans cite the release of the video for One as the end of the “Old Metallica”. If you have never seen the full video for One, go watch it, it is one of the best videos ever made.

Metallica would release their “Black” album in 1991 to much mainstream success and critical acclaim. But in doing so, they were perceived to have “sold out” by releasing what others wanted them to instead of what had gotten them to where they were. For me, this was driven home when Lars responded to the question “Many fans say that you have sold out. Has Metallica sold out?” with the response, “Yeah, we have sold out every stadium and record store in the country.”

I have often wondered if Cliff hadn’t died in that crash if Metallica would have gone on to release albums as powerful as the first three, or if they would still have gone down the path to pop rock. Of course there is no way we will ever know.

If you have a spare moment, I urge you to dust off an old Metallica song today, and just listen to it and wonder about what may have been. If you don’t care for instrumentals, you could always just play Fade to Black, because really, you can’t go wrong with old Metallica. Rest in Peace, Cliff. 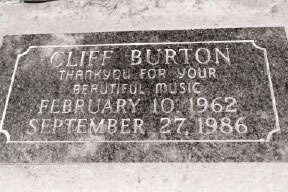