I am guessing that Party Poker must have the most television advertising going on right now. While the level of play at any of the major poker sites is erratic at best, especially at the low limit tables, even I feel superior to the majority of the players I run into at Party Poker. I have by far my best winning percentage over there and finish in the money probably 2/3 of the games I enter. Of course when I bow out early it is generally because someone is in on a hand they have no business calling with, much like I was doing not so long ago, come to think of it.

I was in a $6 buy-in game this morning, and had been chugging along with maybe one playable hand in the first thirty. Thankfully, it was playable enough that I busted someone out, though he was the short stack so it didn’t contribute greatly to my stack. It did give me enough chips to compete with everyone else though (truth be told, I had made a horrible call earlier in the game with a pair of queens and it took me all the way to the river -even when the flop was a pair of kings- to admit defeat and lay it down. Stupid, stupid mistake.

I was in the big blind when I got dealt a nice, high-end suited connector. There were five people at the table and everyone called the blind, which I raised hoping to eliminate a couple of K Q offsuit limpers. I only raised it 400 (I think) but that was enough to knock two guys out of it. The flop came up just beautiful for me, and I bet into it, knocking out one more player, leaving only myself and one other guy. (pity I only thought to take a screenshot after the turn).

So, just to set it up a bit, I knew this guy had a high pair, or he had made what could be the worst call in the history of poker -it was Party Poker, that is always a possibility. If his pair was Queens, the flop would have given him a three of a kind, which I am sure he would have gone all in with he should have played a bit stronger to my weak bet. He must have thought that I didn’t have the queens either though, or he would have folded. Currently, I was in an open ended straight flush draw, which necessarily implies any straight or flush draw. At any rate, the turn came up in my favor and I went all in. There was already 2,500 in the pot and I didn’t care if I knocked him out of it or he called because there was no way he was going to beat my hand -barring a nut flush draw, and I don’t think there is any way he is playing the A-K of clubs that strong. I am not basing that on anything at all, just a gut feeling.

When the guy actually called the all in, I was left re-evaluating my previous thinking. Maybe he really was in it on a nut flush draw. I found it far more likely that he had pocket queens and thought he was going to take down the pot. There was also the possibility that he was also holding a 10-J, but I don’t think he is going to play it that strong pre-flop. Of course there is also the possibility that he has just made a lower straight with a 5-7 or a 7-10, which he really shouldn’t be in the hand at all with, but again it is Party Poker.

I was extremely confident that the turn had given me the win. The river, however, was just kicking the guy in the nuts: 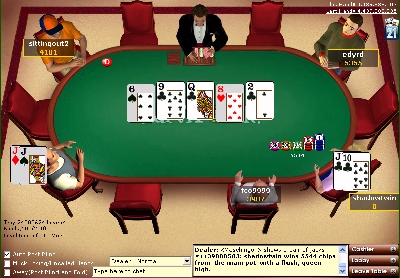 Yes, he went all in with pocket jacks despite there being a flush draw and multiple straight draws on the table. My only question is what did he think I was holding? He must not have considered that at all, it is either that or he thought I had flopped middle or low pair and was trying to bluff my way into the pot. I suppose there is also the possibility that he was going all in on the gutshot since the pot was so big. But enough about what he might have been thinking.

I am extremely pleased with this hand. Not just the outcome of it either. I am pleased that I had the confidence to raise from the big blind to knock off some of the competition, even though my hand was less than ideal. The rest of it was just the luck of the draw really. The flop could just as easily have brought up a pair of aces and a jack. Once I learn how to play that flop and still come out with the chips, my ego will increase exponentially.