I really strive to avoid ever putting anything political on this site. The main reason for that is that I feel I am well enough informed to make my own decision on issues, yet not so informed that I would want anyone to read this and take my opinion as a truth. I know that everyone who reads a blog-type-thing with any objectivity will take the opinions with a grain of salt, but I am not even sure my personal opinion is worth that grain.

There are, of course, times when even my small-minded understanding of politics can be dead-on and unarguable. One of those times happened today as I was doing a cursory search of the Yahoo news.

Just for fun, here is the news story that I found on Yahoo news:

The first paragraph, which is usually listed along with the headline, said;

DAVENPORT, Iowa – President Bush (news – web sites) and Sen. John Kerry (news – web sites) clashed at close quarters along the banks of the Mississippi River on Wednesday, the Republican incumbent pledging to “spread ownership and opportunity” if re-elected while his Democratic challenger campaigned as a fiscal conservative able and eager to fix the economy.

That is all well and good. I only clicked through to the article because of the photo that was shown beside the headline (which I will get to in a moment). After reading the headline and the first paragraph, I would think that if they were going to show two photos in the story it would be one photo each of Kerry and Bush, right? Nope. Below are the two photos that were accompanying that article, in no particular order. See if you can guess who is who! (both photos are from the Associated Press, by the way, though I am not going to waste my time looking for the names of the actual photographers.) 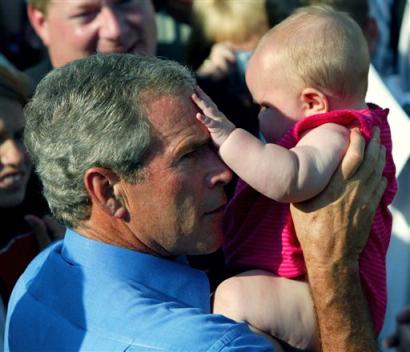 If you guessed that this first photograph was George W. Bush holding a baby, you would be correct!

If you guessed that this photograph was of the other candidate, whats-his-name, you would be wrong. No, see, this is BONO. He is a member of the band U2 I think, and certainly not John Kerry. How did it happen that a prominent site like Yahoo accidentally put a picture of Dubya holding a baby right next to a picture of BONO? This could have been a simple mistake, of course, but for the next hour and a half the pictures remained the same. Though as I checked just now, there is a photo of Kerry on the top with the photo of BONO still the second photo.

Now, please look again at that photo of Bush. Doesn’t it look a little bit like Dubya is giving the evil-eye to a baby who has slapped his hand to his(Bush’s) forehead, possibly in the hopes of slapping the Devil out of him? I don’t know. What I do know is that putting the picture of Bush holding a baby up as the Republican point photo, then following it with a photo of BONO (regardless of how democratic he happens to be) is going to swing to the advantage of the Republicans…Unless, of course, people see that even the baby hates Bush and is trying to push him away.

There are people on the Republican side (damn near all of them) that express that the problem with the “war on terror” is all based on the fact that the media is very liberal (slang for democrat). Anyone with a single shred of intelligence understands that it is completely the opposite, but that myth still persists. That has led all of us in the ‘lunatic fringe’ (Republican slang for Democrat) to find our news from sources that are not owned and operated by corporations that are spending millions of dollars a year to keep Bush in office. Every national station has interest in either Bush himself or the interests that Bush & Co. are kicking back money to. I really used to think that the news I read on the internet was not biased…I guess I better rethink that one…